“Some people want it to happen, some wish it would happen, others make it happen” 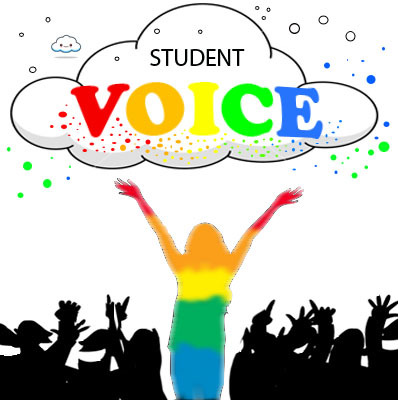 Student Voice offers the students at Bonus Pastor the opportunity to express their views on school issues and make changes to benefit the school and wider community. Students who volunteer to be part of Student Voice play a vital role in upholding the school’s Catholic ethos whilst ensuring student concerns are raised and addressed. At Bonus Pastor, we believe that students have a valuable contribution to make to the effectiveness of their school and their involvement in the operation of the school itself is a valuable part of the education process.

Student Voice members meet regularly to discuss issues which students feel need to be addressed and choose the most appropriate course of action.

An example of one of our most recent campaigns is the change in policy to allow girls the option to wear trousers. This was a long, hard-fought campaign during which students conducted extensive research on why it is important to have the choice, they conducted opinion surveys to see if this view was representative of all students in the school, they sampled different trousers at our local uniform supplier to ensure that the quality, fit and match was good and students even presented their case to the school governors, in order to implement this change. This campaign was run completely by the students and it demonstrates the impact students can have on school life and how important it is for them to have the ability to do so.

In addition to representing the views of the students, Student Voice also celebrates students’ accomplishments and successes through the Jack Petchey Achievement Award. The Jack Petchey Achievement Award is a nationally renowned award which recognises outstanding young people in London and Essex. Nominations are taken from staff and students with the winners being chosen by anonymous vote by the Student Voice team.

Winners of the award get a certificate and prize, along with a £250 grant that they donate to the school to enhance the lives of students. In the past, many winners have used the grant for new library books, text books, a new football it or a reward trip for their house or year group. Winners are also invited to a prestigious awards evening to be presented with a medallion in front of their friends and family.

Bonus Pastor is a proud participant in the Young Mayor of Lewisham scheme. The young mayor provides a focus and a channel for young people’s views to be heard by decision-makers.

The young mayor gets support from young advisers and the young citizens' panel. They have access to the full range of young people’s forums, networks and school councils.

Lewisham has the longest established young mayor programme in the country (it was started in 2004 by Sir Steve Bullock, former Mayor of Lewisham). It is influential in encouraging other councils to provide this opportunity for young people.

Bonus Pastor student Femi Komolafe was elected as Lewisham’s 16th Young Mayor. An amazing achievement for him and for the school.

In collaboration with the Young Mayor of Lewisham Office, Student Voice offers students the opportunity to attend some of the fantastic events run by the Young Mayor’s team at the Catford Civic Suite. Some of the trips we have been lucky enough to attend are detailed below.

Students were invited to attend the event where schools and organisations prepared a variety of activities which addressed women’s history as well as issues women are experiencing in today’s society.

This is a brand new event run by the Young Mayor’s Office which allowed students to learn about this history of the LGBTQ community and to talk about current issues the community is facing. The event was also attended by the Positive Aging Council which enabled students to meet with older members of the community to discuss LGBTQ issues from different perspectives.

The Student Voice Team have been working with TFL staff on a youth led programme for secondary schools. YTA offers innovative ways to involve young people in ways to improve their own wellbeing, the surrounding environment, and the local community. Students planned, organised and created a film, ‘Just Think, Don’t Judge’ to highlight some of the negative stereotyping that happens on buses and to promote positive attitudes and behaviour between the youth and older members of the public.

There are further opportunities to continue working with TFL on various programmes to try and promote positive messages on public transport.

For more information or to get involved, please email Miss B Collins at:

Jack Petchey’s “Speak Out” Challenge! is the largest speaking competition for young people in the world! Designed and delivered by Speakers Trust, and supported and funded by the Jack Petchey Foundation, this programme has become a high profile, well established part of school life across London and Essex.

Earlier this year, 25 Year 10 students at Bonus Pastor took part in the Speak Out Challenge where they all performed a 2 minute speech in front of the group and a panel of judges on a topic of their choice. All the students gave outstanding performances, but the 5 winners of the day were:

Janelle Tedam was crowned the overall winner and she went on to represent Bonus Pastor at the digital regional final in July. After delivering her powerful speech 'It is that deep' via video, Janelle was awarded first place and will now represent the school in the semi final this autumn. We are extremely proud of Janelle and wish her the best of luck for the semi final. Here is what Janelle had to say about the competition:

"On the day of the Digital Finals I felt extremely nervous because I had watched some of the winners of the previous regional finals on the Speakers Trust YouTube channel and I thought that they were brilliant! This win has given me a ​confidence boost and has reminded me that I can achieve whatever I put my mind to.  I would like to say a huge thank you to everyone in the Speak Out Challenge Team for all their help. Ultimately, I give thanks and glory to God for bringing me this far."

Winlaton Road, Bromley BR1 5PZ
*
Cookie Notice: We use cookies on this site to improve your user experience.
Accept Find out more